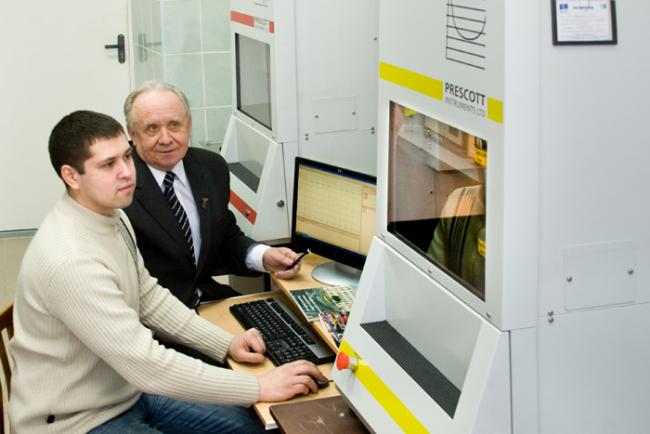 The Department was permanently headed by G.A.Khlebov.

Professor Khlebov is a significant figure at Vyatka State University. Who else can boast that he started his working career in the famous closed Research Institute of Chemical Technology in Biysk, one of the brunched of Korolev’s space company? And Georgy Khlebov had been worked there thirteen years after graduating from the Leningrad Technological Institute named after Lensovet. They worked mainly on rocket fuel there in Biysk at that time.

He came to Kirov just in time. The Institute Rector Boris Ilyich Krasnov gave him a lot of work to do with a difficult task to fulfill: creation of the Department of rubber technology producing qualified specialists. And he managed to arrange strong scientific structure so that its graduates were highly appreciated by the factory "Iskozh", Kirov Tire Plant, other cities’ companies.

There were periods when the Department got contractual works for 200-300 KRUR, that was an amount of the whole institute; and when those "golden ages" had gone, the Department participated in the Federal program "New polymer materials" developed by famous St. Petersburg Technological Institute, Moscow Academy of fine chemical technology, and other universities. Some valuable developments are the Department’s merit.

Under G.A.Khlebov’s guidance there were launched all demanded teaching and research laboratories, appropriate equipment was purchased, deployed scientific research of modern rubber products and other elastomeric materials was conducted, as well as the search for innovation technologies.

Khlebov also happened to work as a Vice-rector for Science and he returned back to the Department as an Associate Professor in a few years.  By return he studied adhesives based on polyurethane and nitrile rubbers. These products are well known at Novovyatsk Mechanical Plant, Vakhrushy Shoe Factory and other enterprises. For Vakhrushy Shoe Factory, by the way, they have developed not only the composition, but also the technical conditions for production.

Life made him to do something unexpected – Khlebov run his own small company "Elastomer" producing car polyester filler. The company produces more than a hundred kilos a month of this necessary chemical product. It is sold from the shelves of Kirov shops "Avtolyubitel", "Lada", "Avtozapchasti" without any delay, because its quality is not worse than of any foreign analogues. It is known in Yoshkar-Ola, Kotlas, Syktyvkar.

The department launched and "made" by Khlebov now successfully works, having already prepared totally 1,479 engineers by today. They are highly appreciated not only at Kirov factories, but also at leading industry companies and Research Institutes of St. Petersburg, Omsk, Yekaterinburg, Karaganda, Belaya Tserkov, Balakovo, Kiev.